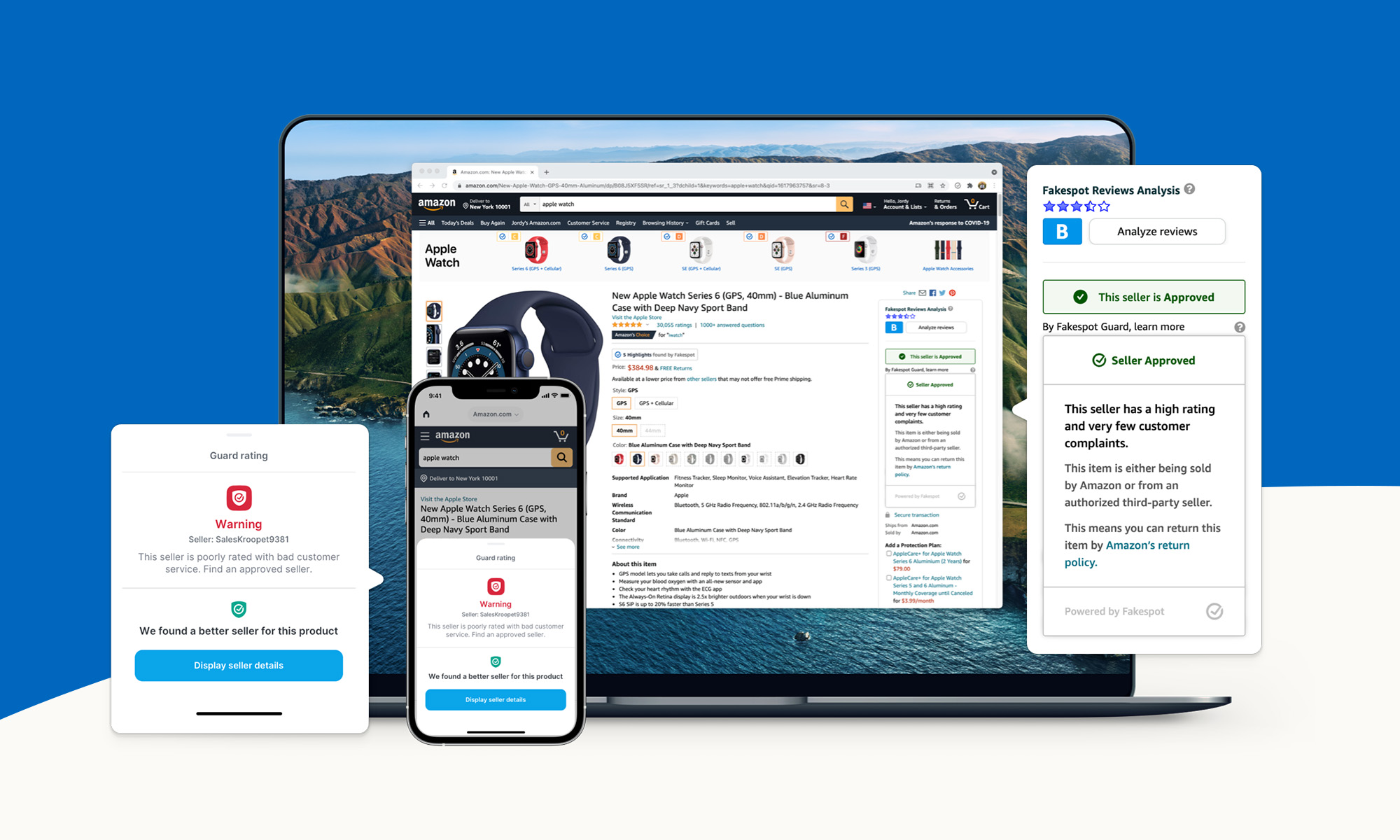 There’s an epidemic of fake reviews on sites like Amazon, TripAdvisor, and eBay. Deceitful sellers are willing to go to great lengths to make their products seem legitimate and popular, including hiring people on social media and various shady online forums to write fake reviews for money.

It’s estimated that consumers around the world spend $152 billion a year under the direct influence of fake online reviews, and the problem is only getting worse. The good news is that some companies are trying to curb the spread of fake reviews, and Fakespot is among the most prominent players.

What Is Fakespot & Why Should I Use It?

Fakespot is a service that uses machine learning and artificial intelligence to detect dishonest reviews on popular shopping sites. The service seamlessly integrates with Chromium-based web browsers, Firefox, iOS, and Android, making it easy to analyze product listings to determine if they are trustworthy.

Fakespot was co-founded in 2016 by Saoud Khalifah and Rob Gross. The company is based in New York City, and it has so far raised $5.3 million in funding, with $4 million raised last year in Series A funding led by Bullpen Capital, with participation from Graph Ventures, Faith Capital Holdings, 500 Startups, and Ty Shay.

Also Read: Awok: The Rise & Fall Of An E-Commerce Giant

“Our mission is to be the most trust-obsessed company on Earth. That starts with empowering our customers to avoid e-commerce scams and make informed purchases. We make reviews more trustworthy with our consumer-first AI” says Khalifah.

While shopping sites are also battling fake reviews, they simultaneously benefit from them because customers are more likely to purchase a product that has hundreds of positive reviews, even if the reviews are fake. As a third party, Fakespot doesn’t have any stake in the game, so they really must bring out the big guns to detect fraudulent product reviews and third-party sellers.

The machine learning and artificial intelligence algorithms used by Fakespot have been steadily improving since the launch of the service, and the user reviews showcased on Fakespot’s website suggest that the service is performing quite well, which is why we were so excited to put it to the test.

How Does Fakespot Work?

The quickest way to get started with Fakespot is to use the online analyzer. The online analyzer supports Amazon (in multiple languages), Walmart, Yelp, TripAdvisor, Steam, Sephora, and BestBuy. All you need to do to use it is to insert a product URL and click the Analyze button.

Fakespot will then instantly display the product’s Review Grade, which is a rating based on the authenticity of existing reviews. The service will also highlight the most noteworthy reviews and provide an overview with useful information about the product listing. 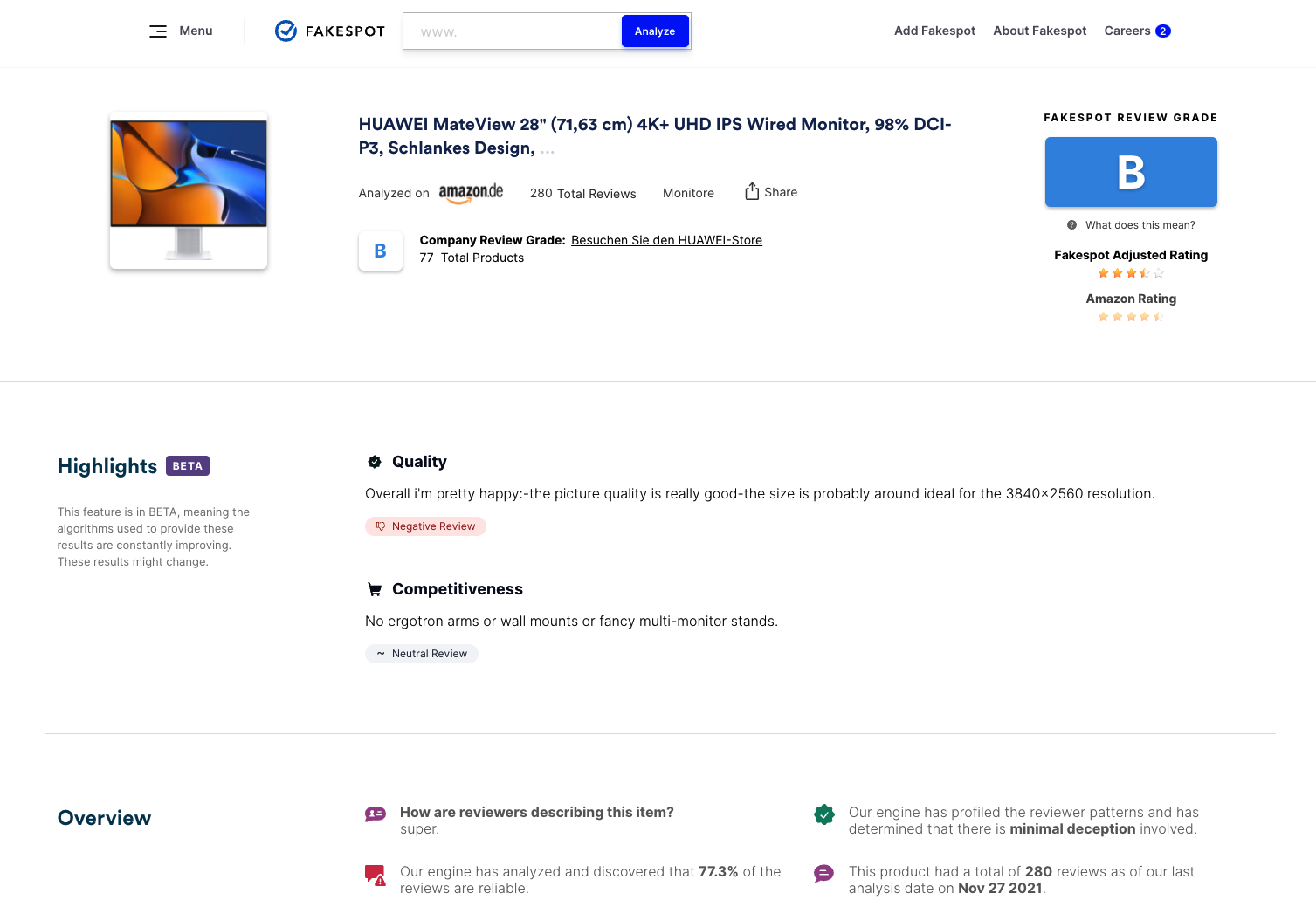 As useful as the online analyzer can be, its functionality pales in comparison with Fakespot for Browsers, which is a web browser extension compatible with Firefox and all Chromium-based web browsers, like Google Chrome and the new Microsoft Edge. 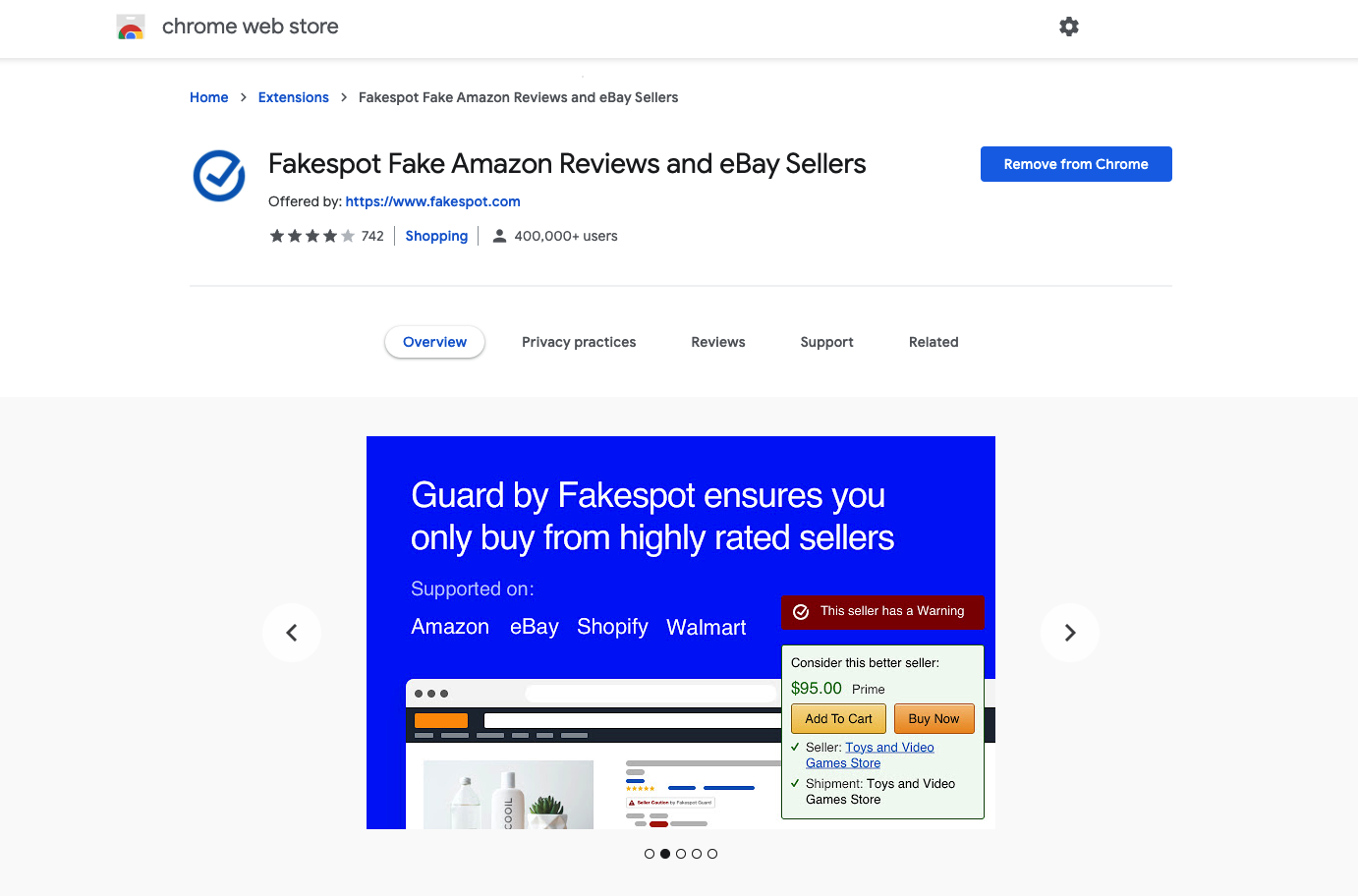 In addition to what the online analyzer can do, Fakespot for Browsers can display real-time review grades, review ratings, alternative sellers, analysis history, and special Fakespot offers. The last feature mentioned may seem especially exciting, but it basically comes down to Fakespot displaying ads to related products — not much to be excited about.

Where Fakespot for Browsers really shines is convenience. By displaying Fakespot reviews analysis directly on the product page, as well as on the search results page, it makes it extremely easy to find products with reputable reviews and avoid the rest.

The extra information provided by Fakespot for Browsers is integrated well, so it won’t degrade your online shopping experience in any way. 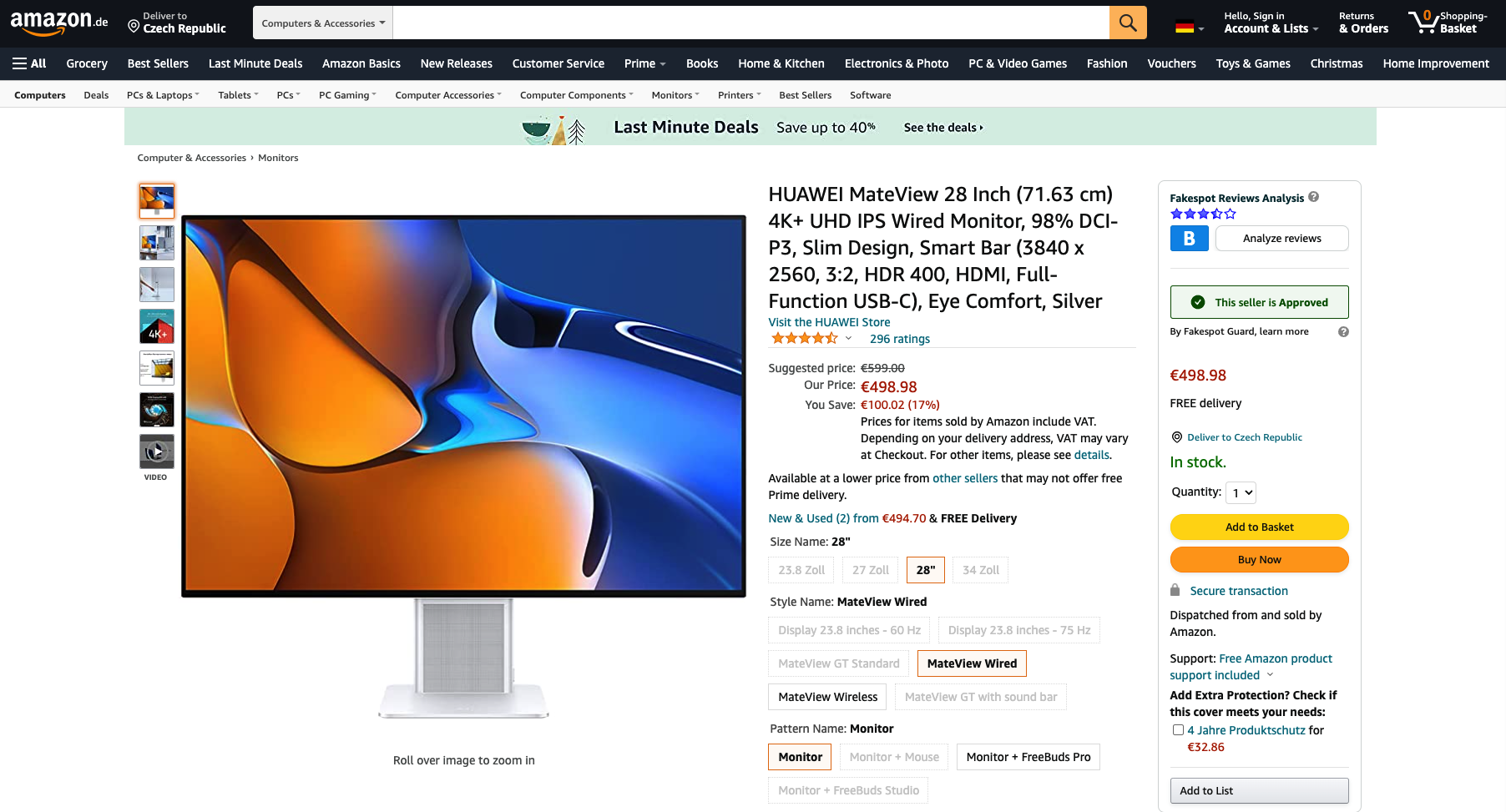 We really like that the extension works even if you don’t log in. If you decide to create an account or log in with your Google account, you’ll gain the ability to track your product searches, receive trusted offers from Fakespot product partners, and get important product updates.

Last but not least, Fakespot also offers mobile apps for iOS and Android. The apps feature a special web browser that integrates the same review analysis capabilities provided by the Fakespot for Browsers extension, allowing you to browse the web just like you’re used to and see the familiar Fakespot grade when you land on a supported product page. Alternatively, you can share products via other shopping apps and browsers.

Is Fakespot Worth Using?

Our experience with Fakespot was positive, and the service seemed to perform everything it promised. That said, we don’t have the ability to verify if the assigned grades truly reflect the trustworthiness of published reviews.

Not too long ago, Amazon reviewed the accuracy of Fakespot and found that it rated products as untrustworthy about 80 percent of the time. Soon after, Amazon got Apple to remove Fakespot from the App Store.

“The app in question provides customers with misleading information about our sellers and their products, harms our sellers’ businesses, and creates potential security risks. We appreciate Apple’s review of this app against its App Store guidelines” said Amazon.

This wasn’t the first time a large corporation accused Fakespot of being inaccurate. In 2018, a TripAdvisor spokesman said, “The claims about fake reviews are based on entirely flawed techniques. Their methods are unreliable for one simple reason: they have no access to the technical data you would need to determine whether or not a review is fake”.

As such, we recommend you try Fakespot for yourself and use your best judgment to decide if the service is useful.

Fakespot is fighting the fake review epidemic using advanced artificial intelligence and machine learning algorithms that are supposed to accurately tell fake reviews apart from legitimate ones. The service is easy to use thanks to the provided web browser extensions and mobile apps, but independently verifying its accuracy is difficult. But since it’s completely free, there’s nothing stopping you from giving it a test drive to see if it can save you from bad purchase decisions.

Text-to-image apps are exploding in popularity lately, so when we saw this offering from PicSo achieve 1K+ upvotes and 270 comments on Producthunt, we had to check it out. 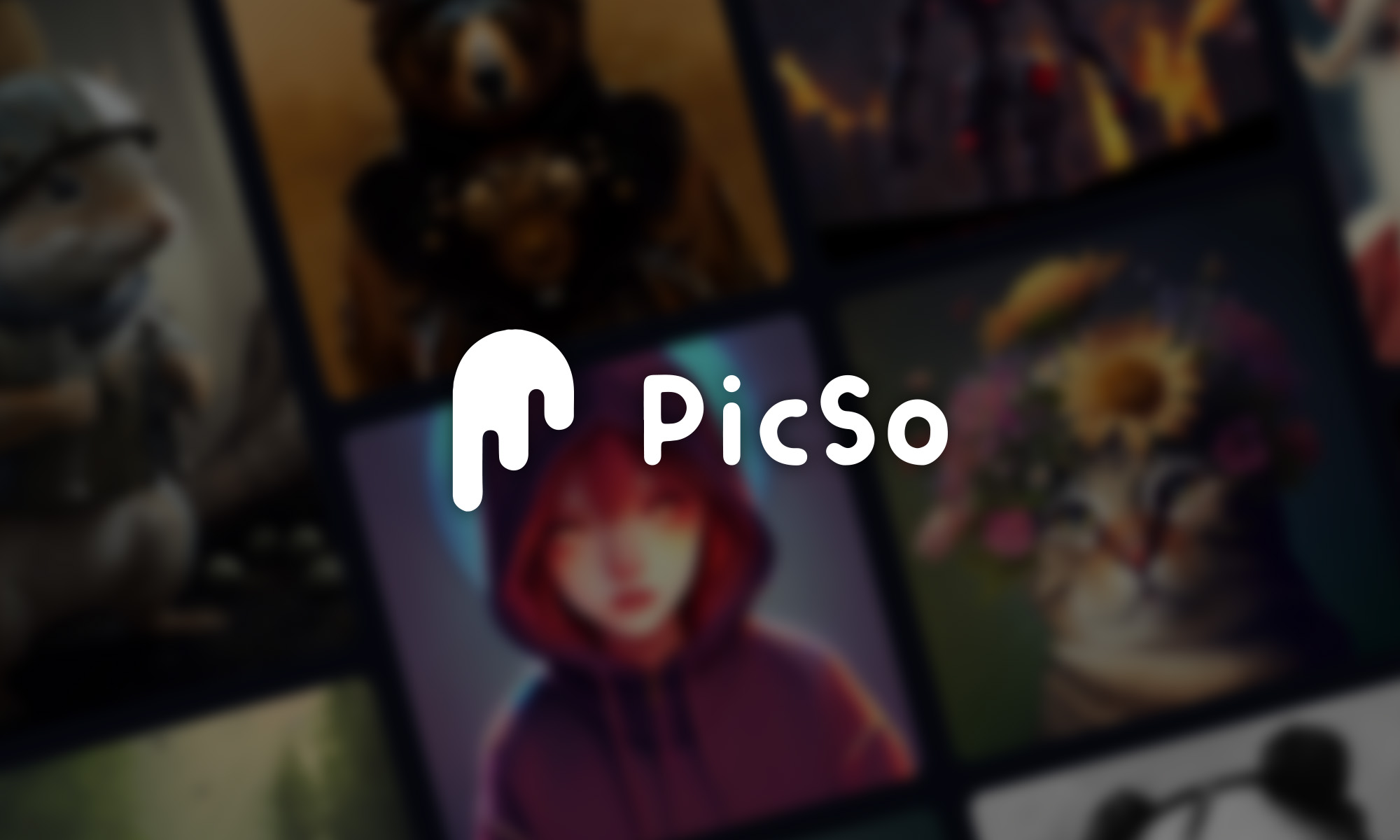 Artificial intelligence has developed rapidly over the last few years, with the technology cropping up in all kinds of applications. However, one medium that’s really gaining popularity right now is the text-to-art generator.

If you haven’t tried one of these apps for yourself yet, the premise is pretty simple. The user types a descriptive sentence into the AI generator, and the algorithm tries its best to generate an image that best fits the description.

So how are the results? Generally, they’re pretty amazing! Typing “squirrel soldier wearing battle armor” will yield some pretty artistic (and humorous) results. Once you’ve exhausted the weird and wonderful, these generators can produce some genuinely decent artwork.

One of the latest offerings in the world of text-to-art AI apps is PicSo, whose developers named “after Picasso to convey the idea that everyone can be a great artist”. Let’s take a look at the app to see if those claims stack up. 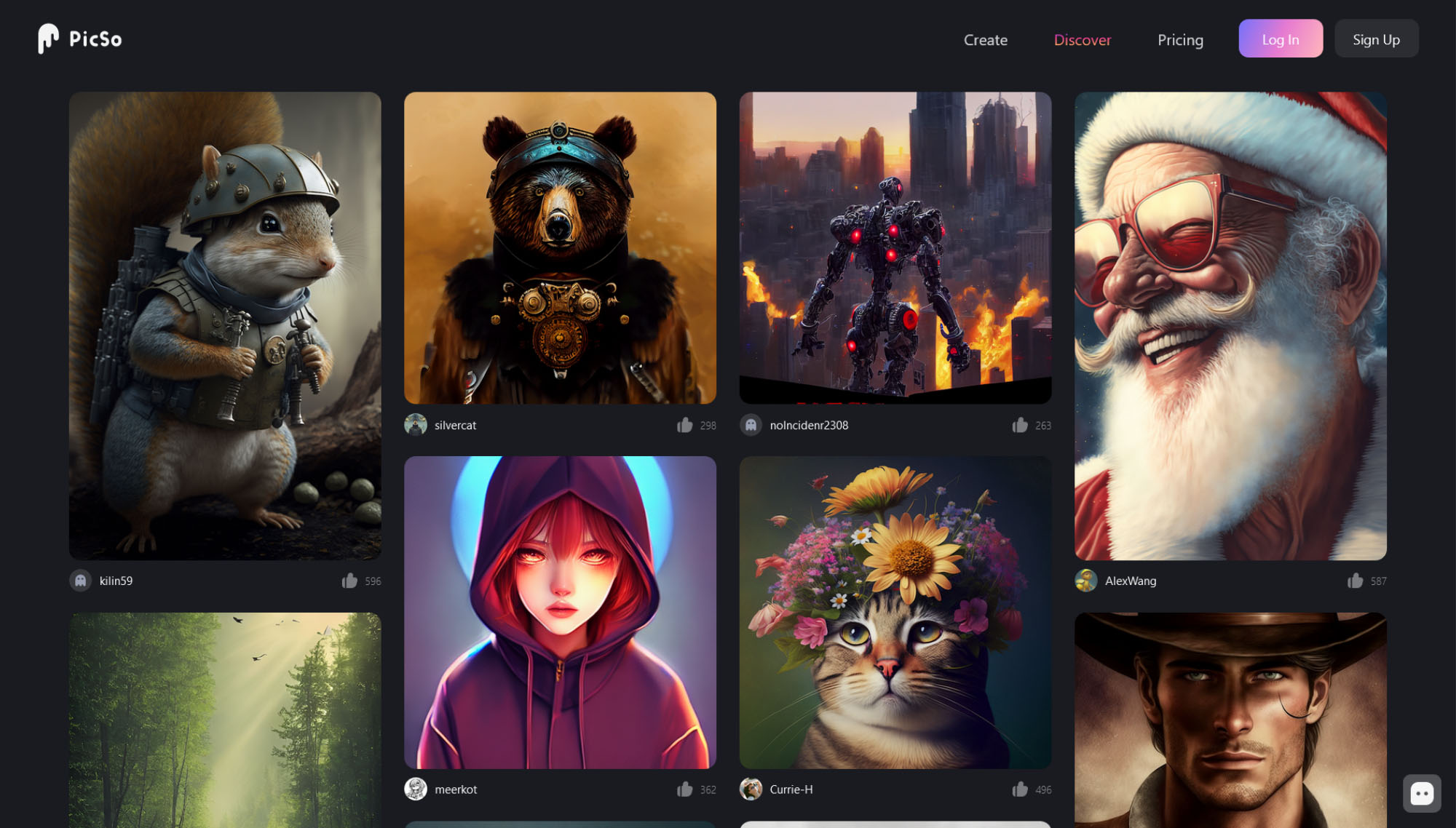 PicSo uses machine learning to search for themes based on the words you’ve entered and skillfully blends them into unique images. The concept might not be new, but the software does offer plenty of unique styles for your masterpieces, including settings for Van Gogh, Epic, Sketch, Octane Render, Cyberpunk, CG Render, Anime, Traditional Art, Digital, Ghibli, and many more.

How Easy Is PicSo To Use? 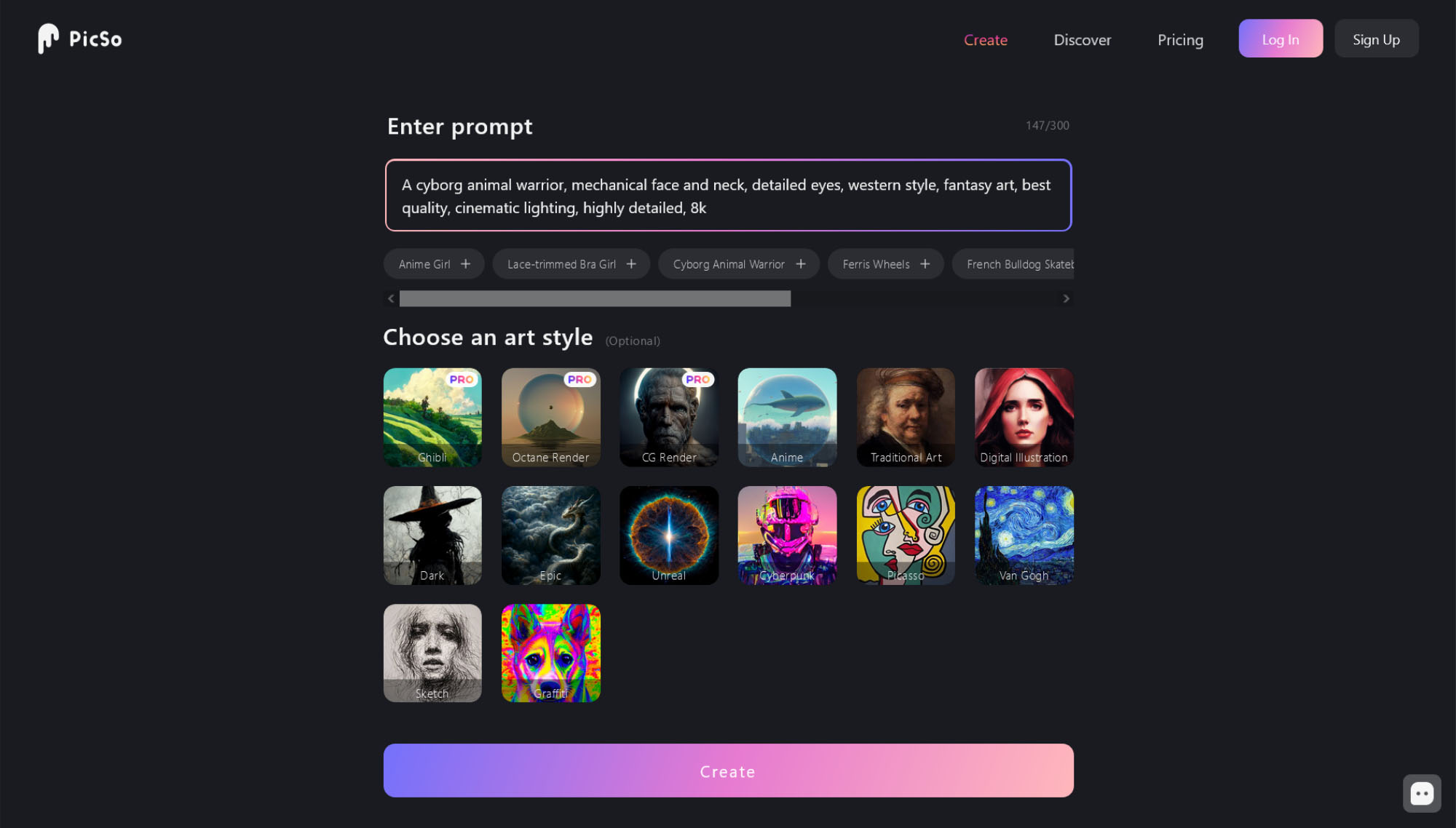 PicSo’s AI text-to-image converter is straightforward to use. Here are the basic steps involved:

To start creating amazing artwork, click on the create button.

Step 2: Type In A Phrase

Enter a phrase to generate an image based on your input, select an art style and then click the create button.

Step 3: Press Save Or Publish

Once your art is generated, you can either save a copy or publish it online.

What Platforms Is PicSo Available On?

PicSo is available on iOS and Android, as well as via browsers. 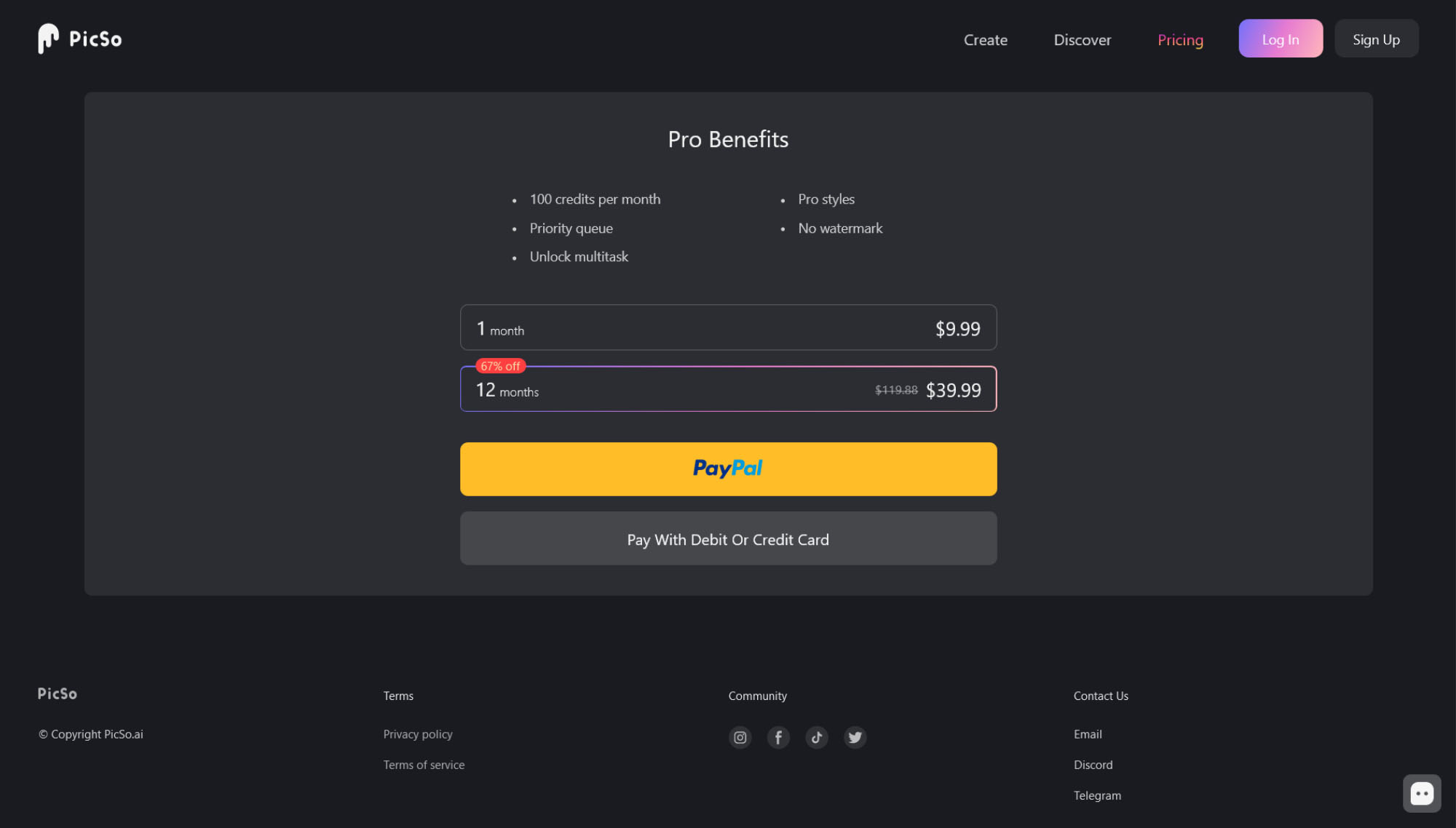 PicSo is a free-to-use app, but there are some caveats. You can generate 3 free images per day on the app and 3 more on the website. You can unlock 2 further freebies by watching ads.

If you want to create more artwork than that, you’ll need to purchase a Pro subscription, which unlocks 100 credits per month, Pro styles, and multitasking. In addition, you’ll enjoy priority rendering for your images and the watermark will be removed.

Overall, we really enjoyed using PicSo. The app is versatile, user-friendly, and constantly gets decent results. The artwork produced by PicSo is of excellent quality, and the site offers alternative formats for output and upscaling too. If we had to think of a downside, it would be that the free version is a little restrictive — however, the subscription pricing is very competitive if you purchase a whole year at once.

If you want to take PicSo for a test drive, head over to the website, or visit the Apple App Store or Google Play.