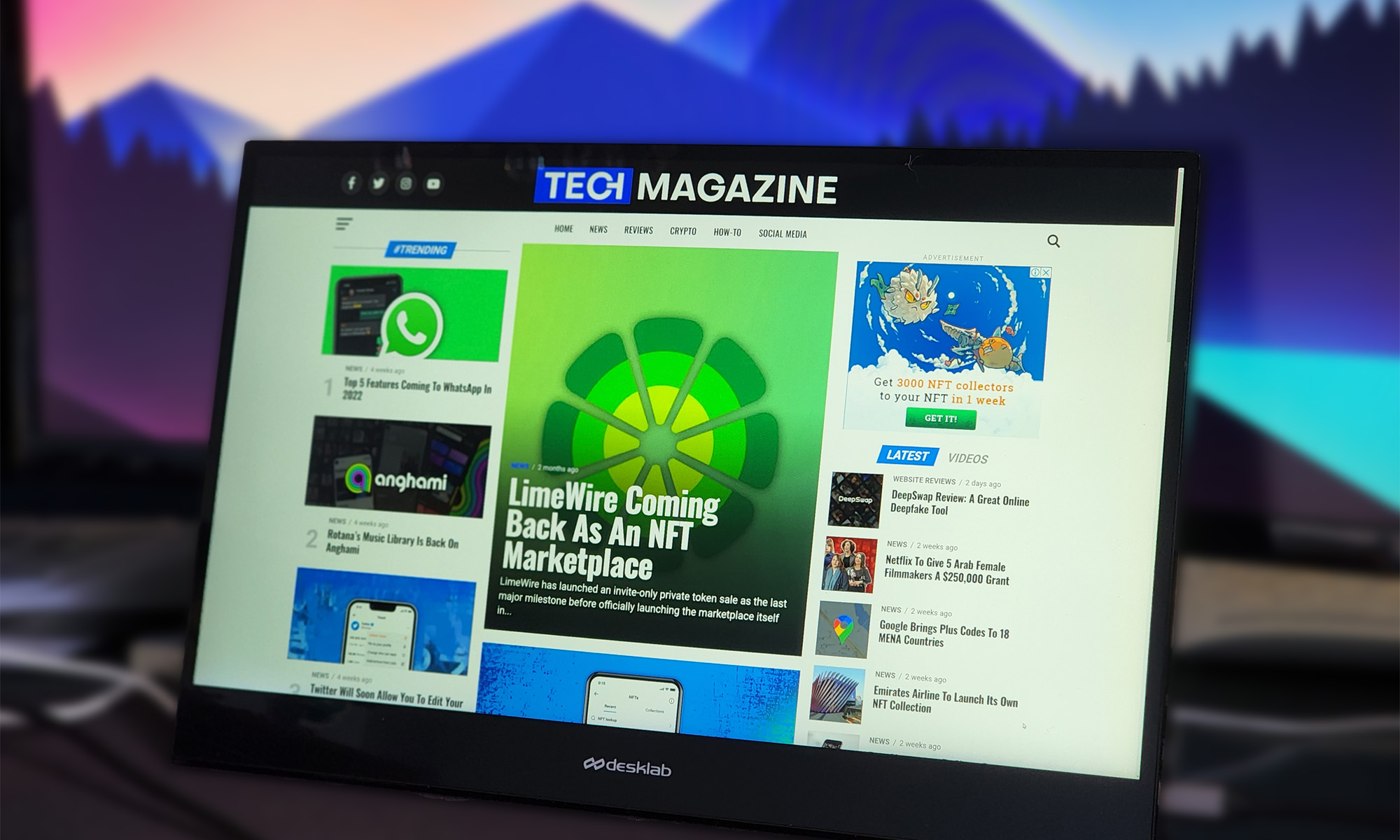 The only problem is that not all places where work can happen are equally equipped to support the needs of modern white-collar workers. Laptops and smartphones largely solve this issue, but their smaller screens make them less than ideal for certain tasks, such as juggling data between two spreadsheets.

While traditional monitors don’t exactly fit in the average backpack, an ultralight portable monitor like the Desklab 4K does, and remote workers are not the only group of users who can benefit from it. 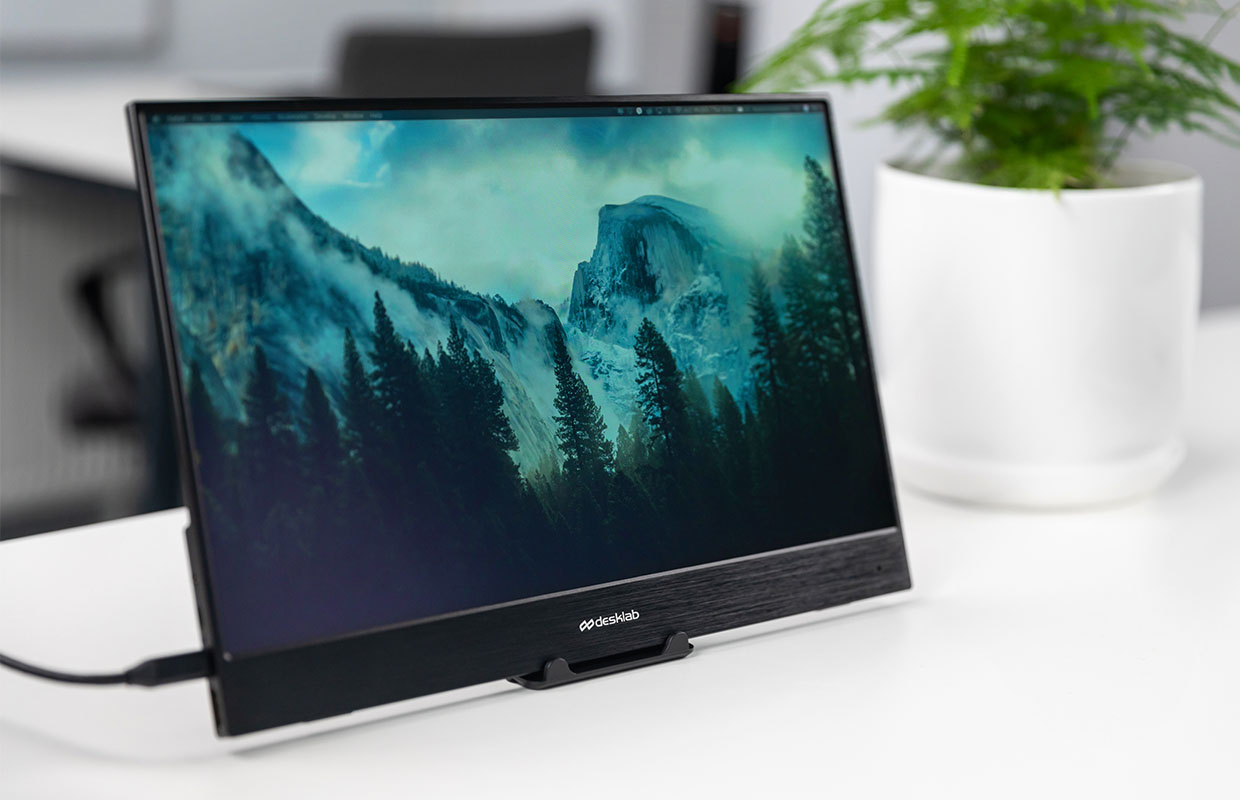 On the left side, there’s a power button, control wheel, and microUSB port. The right side is where you can find a 3.5 mm port, two USB Type-C ports, and a single HDMI port.

The monitor has an integrated magnetic stand that doubles as a cover when flipped around. The stand works as advertised, allowing you to use the monitor in portable and landscape mode, but it does feel considerably cheaper than the monitor itself.

Even though portability is the main selling point of this monitor, there’s actually no battery inside the compact case. That’s because the monitor is so power-efficient that it can be powered directly by the laptop or smartphone it’s connected to.

That’s good because you don’t have to worry about charging it before use, but it also means that the battery inside the device you connect the monitor to will last much longer.

The only time when the monitor does require its own dedicated source of power is when you connect it using an HDMI cable instead of via USB Type-C, so keep that in mind if that’s how you want to use it. 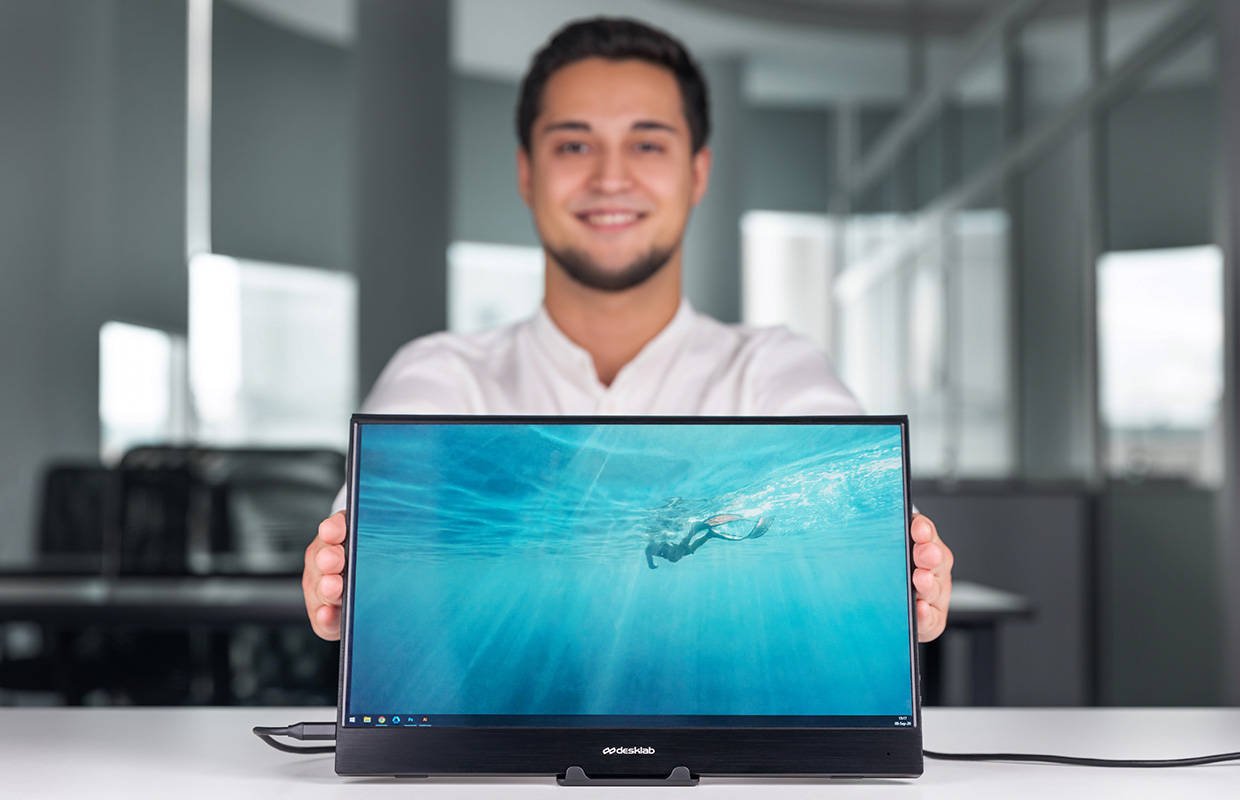 The first thing we noticed when we turned on the monitor for the first time was its sharpness. Thanks to its 4K resolution, text is perfectly smooth even when set to a small size, and the smoothness makes it easy to use the monitor for a long time without any eye fatigue.

In addition to being sharp, the monitor is also very bright. At 400 nits, it’s just as sharp as the latest MacBook Air, so using the monitor outside isn’t a problem.

If you’re into photography or graphic design, then you’ll be pleased to know that the monitor is fairly color-accurate. Sure, it’s no match for professional monitors, but its true LED backlight technology really does help with color reproduction.

Since the Desklab 4K monitor is compatible with Nintendo Switch, Xbox, PS4, and other popular video game consoles, we should also mention that the monitor has a lightning-fast 10 millisecond response time, so even fast-twitch gaming is a pleasure.

Of course, gaming on this monitor would be even more pleasurable if it supported ultra-high refresh rates, but that would make it far less efficient in terms of energy consumption. Fortunately, it does support low-flicker technology for increased comfort when using the monitor at lower brightness levels. 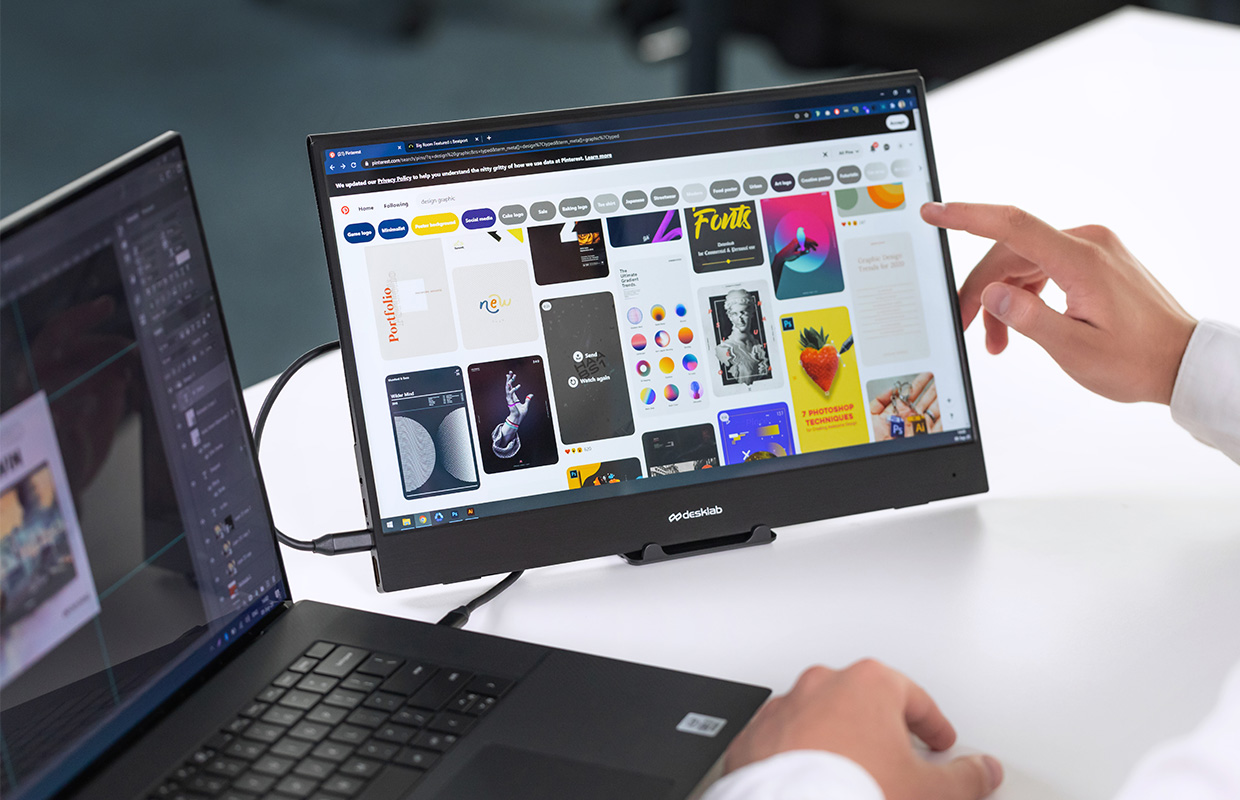 Because the Desklab 4K monitor is equipped with both USB Type-C and HDMI video inputs, you can use it with basically any device that can output 4K video.

Lower resolutions are supported as well, but image quality, and sharpness in particular, goes down considerably with them. If you want to use the monitor primary with a device that can output only 1080p video, then you should consider getting the 1080p model.

As far as setup goes, there’s really nothing to set up because the monitor doesn’t require any additional software and is designed to work as soon as you plug it in.

The Desklab 4K has a touch layer that allows you to navigate with your finger and use familiar gestures, like tap, drag, pinch, zoom, scroll, or spin. The touch layer works great even when the monitor is connected to a MacBook, which is a pleasant surprise considering that Apple has yet to release a Mac with touch support. 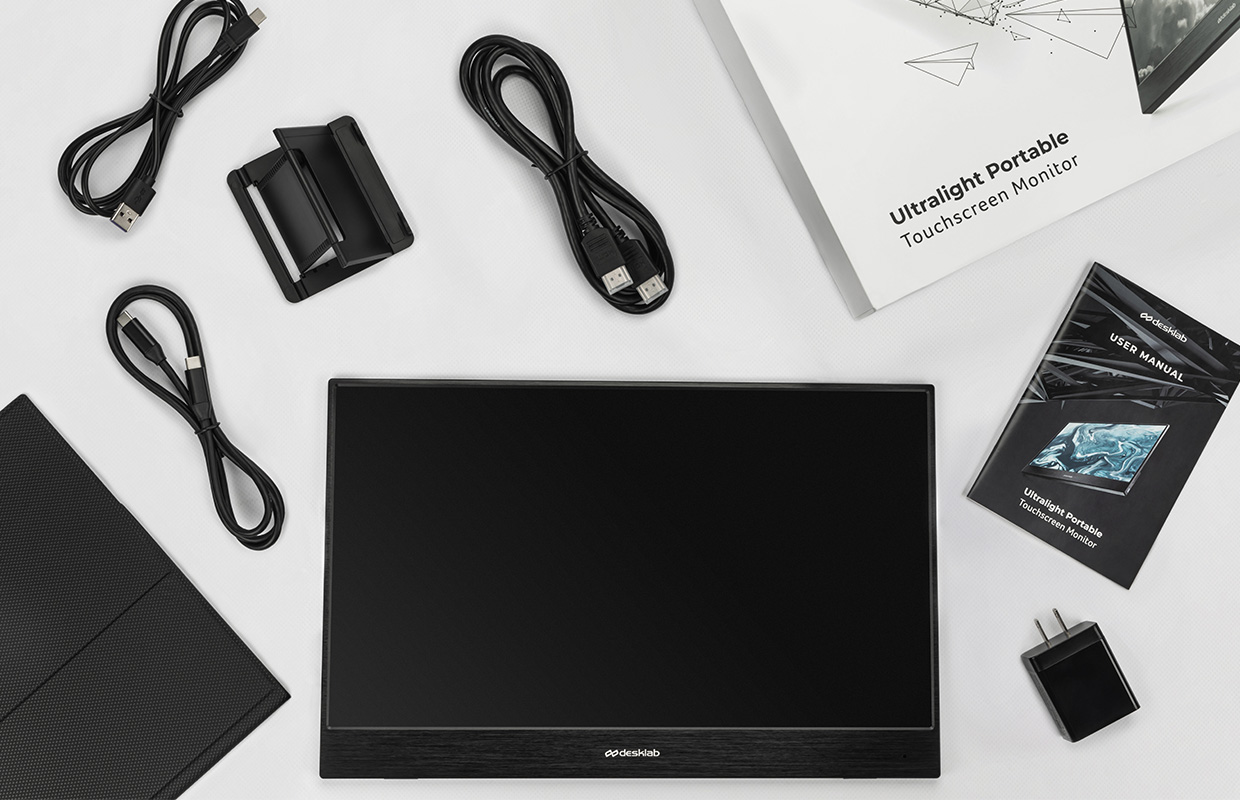 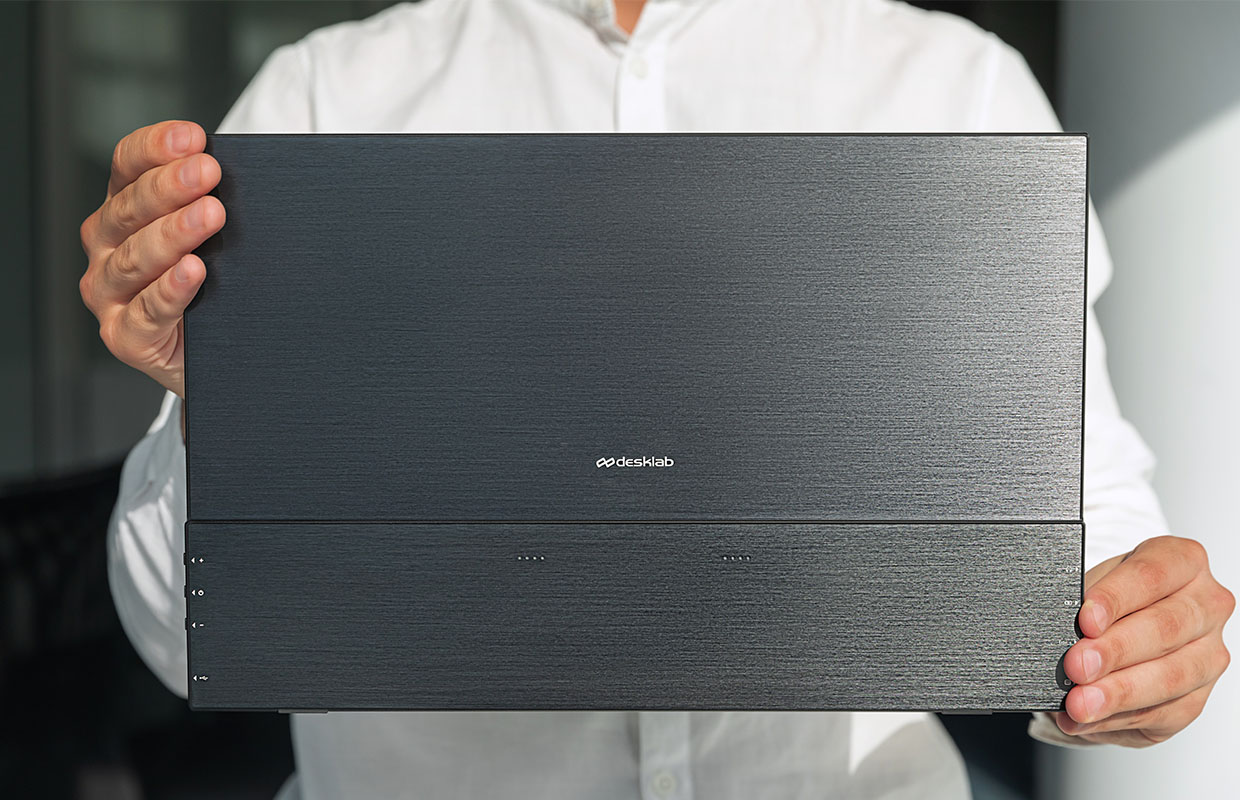 Overall, the Desklab 4K is an excellent portable monitor that’s well worth its price of $399.00. Unlike other similar monitors that you can find online for less money, the Desklab 4K is bright enough to be usable outside, and it does have plenty of other features that make it suitable for regular use.

The two things we don’t like the most about this monitor (the poorly designed on-screen menu and the flimsy stand) could certainly be improved, but they’re definitely not huge issues that would make you regret your purchase. You can get your Desklab 4K portable monitor directly from the company on their official website.